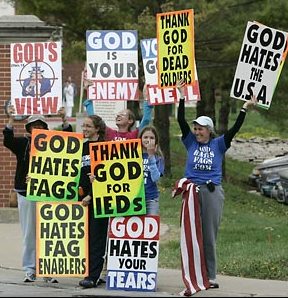 In a remarkable turn of events the Ku Klux Klan has come to the defence of sanity as it protested against Westboro Baptists at a ceremony to honour fallen American soldiers.
KKK members turned out to support US Soldiers because of the presence of the Westboro picket who displayed their usual placards proclaiming (amongst other things)


·         Thank God for Dead Soldiers
Compared to that, the KKK appeared to be entirely reasonable.


But wouldn't you think that when the KKK turns up to say that you are too extreme - you might just think twice about what you are doing?
Not a bit of it -  a Westboro Church member is reported to have said, "The KKK have no moral authority on anything"  although this does seem rich from the group which pickets the funerals of soldiers and homosexuals, singing and shouting words of hatred in the name of God.


What the KKK will do with their new found respectability is anyone's guess, but one thing is for sure - since the US Supreme Court ruled in favour of Westboro Baptist Church in March, these 'Christians'  will be free spread their message of a God who hates, and a Church which is always ready to condemn.
Perhaps one day however, when the final trumpet sounds, and the books are opened in heaven, these purveyors of hatred and prejudice will stand side by side at the throne of God ready to hear his immortal words...